Serving the Lord in Song

DON and EARL were a Knoxville, Tennessee-based white gospel duo who were broadcast nationally during the 1960s. From my home on Long Island, I picked up their show on AM superstation WWVA, from Wheeling, West Virginia that featured on-air miracle cures. In that exotic setting, Don and Earl's homespun sincerity stood out.

Don and Earl were neglected by most country music and old radio references, and I think it's a shame. They were a memorable act. For me they characterize a time when nighttime AM surfing provided a rich variety of unprocessed Americana.

We in the DON AND EARL TASK FORCE have made it our business to seek out the story of these troupers. After years of searching databases, books and internet sites, years of confounding country music gurus and old-time radio show experts, I'm happy to say that our SWAT team has returned from the trenches with this brief report about Don and Earl. 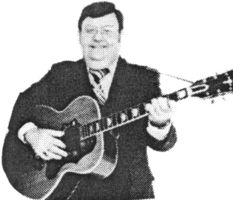 Don was born Ladonuel Williams on June 18, 1924 in Briceville, TN. After serving in World War II, he began broadcasting as a singer at a local station in Knoxville Tennessee.

Don, the tenor, was a born storyteller and a born whistler. Earl sung the lead and provided the guitar accompaniment. In addition to their radio shows, they toured, singing on the church circuit, and ran a sound studio in Knoxville. After Don's death, Earl's wife Libby joined him as a partner and to this day, they are active performers, recording privately, touring for weeks at a time and singing in churches.

During the peak of Don and Earl's radio days, their shows were produced at Wolfman Jack's home station: XERF, the "border blaster" based in Del Rio, Texas. The 500,000 watt signal was broadcast from across the border in Mexico and from there syndicated to over 100 stations on the North American continent.

The duo also had shows that originated at KXEN in Waterloo, Iowa. XERB in San Diego, California and at WCKY in Cincinatti, Ohio as well as WWVA in Wheeling, W.Va.

Don and Earl recorded tapes for as many as a hundred groups in their Knoxville recording studio.

This same studio was the site of Gospel Light Records and the Don and Earl Record Company where they began recording and marketing their own LPs during the 1960s.

(From The Knoxville News-Sentinel newspaper after Don Williams' March 5, 1985 death)

Well-known gospel singer Ladonuel "Don" Williams has died at the age of 60, of cancer. He passed away Tuesday afternoon at his home in Seymour.

Williams, who with his partner Earl Mays, of Knoxville, formed the duo "Don and Earl," sang in churches throughout the United States. During most of that period their taped radio broadcasts could be heard from Mexico to Canada and several other countries on some 100 different radio stations including the continent's then most powerful, XERF in Mexico.

Williams wrote many songs during that time which are still performed by others.

Williams' singing career was launched after he won an amateur contest while in the Army during World War 2.

Following that he performed in the long-running USO drama "Glory Road," which chronicled the exploits of the 66th Infantry Division, in which he served.

Williams portrayed an enlisted man and sang "When My Blue Moon Turns to Gold Again" and "The Great Speckled Bird" in the drama which entertained thousands of troops and was praised by "Stars and Stripes," the Army newspaper, as the best USO drama of the war.

After his return to East Tennessee, following the war, Williams worked briefly as a coal miner in his native Briceville, and performed In a country music band. Following his religious conversion in 1946, he turned to gospel music.

In 1950 he recruited Mays to form the duo "Don and Earl." Their radio show could be heard locally for many years over radio stations WKXV and WIVK in Knoxville. Williams moved to Seymour in 1956, where he resided with his family until his death.

Relatives said Williams would long be remembered for his charitable nature, his sense of humor, his singing ability, and for his dedication as a Christian.

Williams was a member of Gospel Baptist Church, on Avenue A In Knoxville, where his funeral is scheduled for 2 p.m. Friday. The family will receive friends Thursday from 7 to 9 p.m. at Berry's Chapel in Knoxville.